Two apartments, 23 years and 4000 miles apart, my journey the thread that connects them.

I look around my new home, my first owned home in the US – a beautiful 1900 sq foot space warm in the glow of old wood floors, red brick and reassuringly strong beams, tucked away in a converted paper mill in one of Seattle’s oldest neighborhoods. Jazz floats in through the windows, probably from the corner bar. 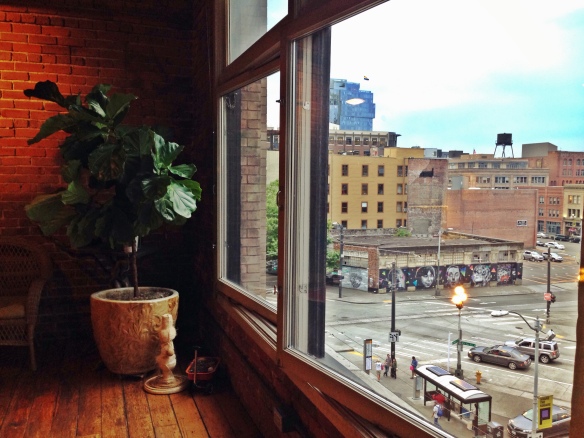 I feel grateful to be here. And thankful to myself and my pillars (Amee and Mariya) for making it into this movie scene except it’s not a movie and I’m not acting. It’s as real as the decades of consistent effort it’s taken to get here. My mind wanders to a little girl, my younger self.

When I first entered our new, much humbler home, a tiny apartment awkwardly stacked on top of a busy bazaar with a greasy food-poisoning-guaranteed restaurant right below it, all I was saw was how small and cozy it would be. I didn’t compare it with the homes we’d grown up in, bungalows with manicured gardens lined with jasmine, servants and cars. I heard whispers that our lives were changing for the worse because Abu had died and we had no money, but I didn’t understand why that was such a bad thing. Nothing changed. We were still us, whether we lived in a mansion or a shack. My 13th birthday altered that perspective – more than a little bit. It was a mistake to invite my school friends over. The disdain in their faces, the wrinkled noses at the smell of re-fried food from the restaurant below, the averted gazes at school the next day, the quiet but unmistakable distance in the coming weeks and months, all indicated that my entire worth was summed up in where I lived. Except, here’s the thing – I come from a family of crazy people, optimistic and entirely self driven and self defined.

I remember feeling no anger towards them but knowing that their understanding of the world and of others was superficial and uninformed. That little home gave me focus, helped me connect with what’s important (i.e. my own development) and who’s important (i.e. those that see you independent of your context).

Among the art galleries, startups, venture capital offices and hip restaurants of Pioneer Square, there are two homeless shelters. My friends comment on that being a little scary. It probably is. But yesterday morning, as I got ready for work, I saw one of those homeless guys walk out of the shelter, dressed up in a collared shirt, walking towards downtown Seattle. On my drive over, I wondered if he was going for an interview. What kind of job would he get? Would that job be a stepping stone to something else? What did he aspire to achieve? Would he get there? Did he identify with himself as a homeless man? Did it bother him that that’s all other people saw?

I read Maya Angelou’s poem when I got to work. It’s been my prayer since 1992 and it was my prayer for the man that lives in the homeless shelter.

Lift up your hearts
Each new hour holds new chances
For new beginnings.
Do not be wedded forever To fear,
yoked eternally To brutishness.
The horizon leans forward,
Offering you space to place new steps of change

Context:
Thursday is always a great day to have lunch with co-workers. There have been enough “eventful” meetings over the course of the week that we all need to re-group and blow off steam. Don, Vic and I find ourselves eating our salads together outside the cafeteria one such Thursday. The subject of a peer comes up (let’s call him Maggs). He is notorious for being difficult to work with – self-centered, unprincipled, a poor communicator and lacking in emotional awareness. Maggs also has a very high IQ. This is not the first conversation we have had about Maggs, nor will it be the last I suspect.

Conversation:
We spend the first twenty minutes talking about the specifics of the meeting and how poorly it went because Maggs was putting people down. A sense of camaraderie builds up over our shared angst about being in meetings with him.

And then Vic says “But you have to admit, he’s really smart. I know he’s smarter than me. I mean, that’s just the way he is. We just have to learn to work with it.”

We all pause – it is an unsettling thought. As fairly self-reflective and outcome-focused people, we ask ourselves if this is truly a deficiency in us – do we need to work on being more effective with exceptionally high-IQ people like Maggs? Are we “less-adult” because we don’t have the thick skins required to be in a tough real-world work environment? Or are we just less-smart and need to suspend disbelief when it comes to the Maggs of the world? Is the lesson learnt that we need to work on ourselves instead of being outraged by Maggs?

Don, the most masterful bullshit detector among us breaks the spiral thinking and blurts “What’s wrong with us that we have lowered our bar for acceptable behavior in the work place? By this token bullies in school should be a treasured asset – after all, they teach us the very tools needed to later work with the Maggs of the world”.

The conversation gets a new life – my mind feeds on it and works to deconstruct the assumptions that led us into our thought pattern and the implications of those assumptions in the larger context.

Assumption: IQ and decent human behavior are inversely correlated. Or perhaps if not correlated, a high IQ compensates for a low EQ because we assign a higher premium to IQ than EQ. In the technology industry (which may have some natural selection for introversion, high IQ and lower EQ), that’s definitely a palpable trend.

Implication: Before I get into it, let me assure you that I don’t believe that we are all born equal. Nor do I believe in workplaces being charitable organizations. I aspire to the Randian ideal. However all humans deserve honor and respect. Unless we’re actively championing this right, we are actively or passively (through inaction) allowing the few to violate the boundaries of the many. And given that we are all part of a larger whole, we are allowing a violation of our own boundaries. These negative forces end up defining the culture of our teams and communities – aggressive cultures that optimize for short term individual excellence over long term group dynamics, cultures that value awe-of-intelligence over human dignity and respect.

If an interaction feels wrong or hurtful, it is wrong and hurtful. And if you’re feeling it, I bet you most other people in the room are feeling it too. Don’t rationalize it away. Don’t attempt to take control of it by “learning” how to work with it. Don’t wear your ability to work with bullies as a badge of honor. Take action. Negative conditioning works as well with humans as it does with dogs. Become purposeful in either helping the bullies around you connect with the empathetic parts of themselves and relate better with others or make them irrelevant to your conversation and refuse any invitations to engage in their drama. I realize this is not easy.

Assumption: Maggs is who he is by cosmic design/genetic makeup and not purposeful choice e.g. like being blue eyed or left handed. Maggs as an entity is a constant, an unchangeable universal truth, as opposed to successive conscious and purposeful choices he makes because his life experience suggests that those behaviors will serve him well i.e. get him what he wants.

Implication: If we are already all that we were meant to be, there is no hope to grow. There is no sense of empowerment to choose who we want to be. It’s a life of intellectual, emotional and spiritual impotence. A life of victimhood. Victims don’t map the course of their lives. They endure a course set for them by circumstances, people and “external” factors. I recall that this lackluster approach to life is not how I felt when I was a child. Why not attempt to reclaim that youthful sense of adventure and apply it to our journey as humans?

It is in the act of flowing that water defines itself as a river and in the act of remaining still that it is recognized as a swamp. What acts will you perform tomorrow and how will they define you to the world?